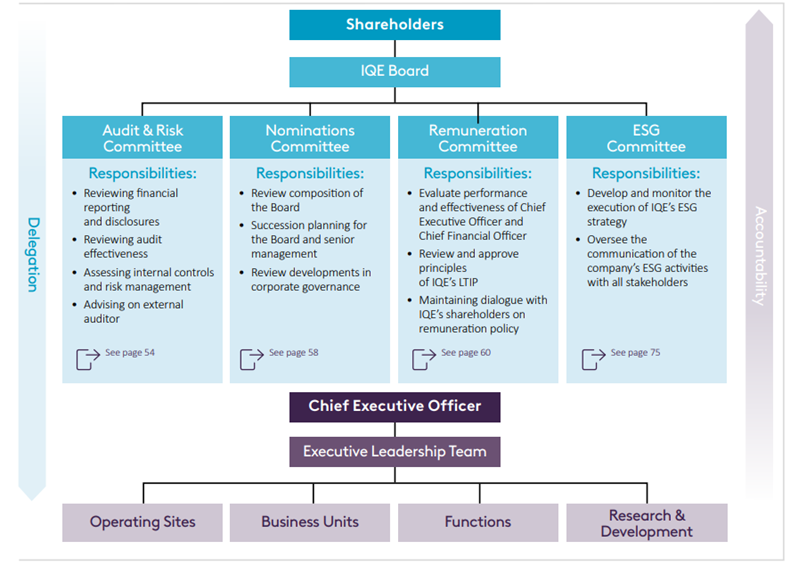 IQE's Board of Directors believes in maintaining high standards of corporate governance and is accountable to shareholders for the Group’s performance in this area.

The Group has chosen to apply the UK Corporate Governance Code (the “Code”) and to provide corporate governance disclosures similar to those that would be required of a premium-listed company. The Code is available on the website of the Financial Reporting Council (FRC) at: www.frc.org.uk.

The Group is headed by an effective and entrepreneurial Board that is collectively responsible for the long-term sustainable success of the Group, generating value for shareholders and contributing to wider society.

All directors act with integrity, lead by example and promote the desired culture of innovation, collaboration, valuing people, integrity, accountability and constant improvement.

The Board actively engages with the workforce including through its Employee Benefits and Pensions Governance Committee, Workers Counsels and ‘town hall’ meetings. Through this activity and engagement, the Board is satisfied that the Group’s purpose, values and strategy are aligned with a culture of innovation, collaboration, valuing people, integrity, accountability and constant improvement.

The Board regards regular communications with shareholders as one of its key responsibilities. The Chief Financial Officer, Chief Executive Officer and Chairman meet with institutional investors on a regular basis to discuss the Group’s performance, the shareholders’ views, and to ensure that the strategies and objectives of the Group are aligned and well understood.

The Chief Executive Officer, Chief Financial Officer and Chairman keep the Board fully informed of any significant matters discussed with shareholders and of shareholders’ views. Furthermore, all members of the Board receive copies of any analysts’ reports of which the Company is made aware.

The Company employs an Investor Relations Manager who supports the Directors with day-to-day investor relations. Together, they respond to investor enquiries throughout the year. In addition, all shareholders attending the AGM are given a presentation on the business and are invited to ask the Directors questions about the business.

The interests of the Company’s other key stakeholders have also been considered in recent Board discussions and has influenced the Board’s decision-making. The Board continuously reviews the effectiveness of its engagement with stakeholders and the mechanisms that facilitate such engagement.

The Board considers that the four Non-Executive Directors, Dr Drew Nelson, Ms Victoria Hull, Sir Derek Jones and Mrs Carol Chesney who have each held office for less than nine years, to be independent in accordance with the Code, and free from any business or other relationship which could materially interfere with the exercise of their independent judgement.

The Board recognises the special position and role of the Chairman under the Code, and it has approved the formal division of responsibilities between the Chairman and Chief Executive. The Chairman is responsible for the leadership of the Board and ensuring its effectiveness. The Chief Executive manages the Group and has the prime role, with the assistance of the Board, of developing and implementing business strategy.

The Board meets regularly through the year - at least six times and additionally on an ad hoc basis as is required to discharge its duties effectively. It is provided with appropriate strategic, operational and financial information prior to each meeting together with reports to enable it to monitor the performance of the Group. The number of meetings of the Board, Committees and individual attendance by Directors is set out in the annual report each year.

At Board meetings, the Chairman ensures that all Directors are able to make an effective contribution throughout meetings and every Director is encouraged to participate and provide their perspective and opinions. The Chairman always seeks to achieve unanimous decisions of the Board following due discussion of agenda items.

Terms of Reference
Terms of reference for each of the Committees are available here: Remuneration Committee, Nominations Committee and Audit & Risk Committee.

IQE has identified the following areas of non-conformance with the Code:

Provision 17: IQE does not currently maintain a succession plan for the Company Secretary or all Senior Management immediately below Board level. IQE will work to develop such plans based on merit and objective criteria. As part of its consideration of developed succession plans, the Nominations Committee will consider the linkage of its diversity objectives with company strategy and the gender balance of those in Senior Management and their direct reports.

Provision 21: IQE undertook an evaluation of the Board during 2020. A formal evaluation of each of the Committees, Chair and individual Non-Executive Directors was not completed. IQE intends to develop a comprehensive process for annual evaluation during 2021.

Provision 36: Share options granted to the Executive Directors under IQE’s LTIP are subject to total vesting and holding periods of 3 ¼ years. In addition, Executive Directors are subject to a minimum holding requirement equal to 200% of their base salary and will have a post-employment shareholding requirement for 2 years. The minimum holding will be equal to 200% of base salary in the first-year post-employment, reducing to 100% of base salary in the second year. A copy of the 2018 UK Corporate Governance Code is available at ww.frc.org.uk.

The Board has delegated specific responsibilities to the following committees:

The Audit & Risk Committee is responsible for monitoring the effectiveness of IQE’s financial reporting, internal controls and risk management systems and processes and the integrity of IQE’s external auditors.

Carol Chesney is chair of the Audit & Risk Committee. Carol is a Chartered Accountant and has also held a number of senior finance roles. The Board is satisfied that Carol is the Committee member with recent and relevant financial experience as required by the UK Corporate Governance Code 2018. The Board is also satisfied that the Committee as a whole has a mix of experience and competencies to assess the issues facing the Group within the semiconductor industry.

The Nominations Committee is responsible for leading the process in the selection and appointment of directors and for ensuring plans are in place for an orderly succession of Board and Senior Management positions.